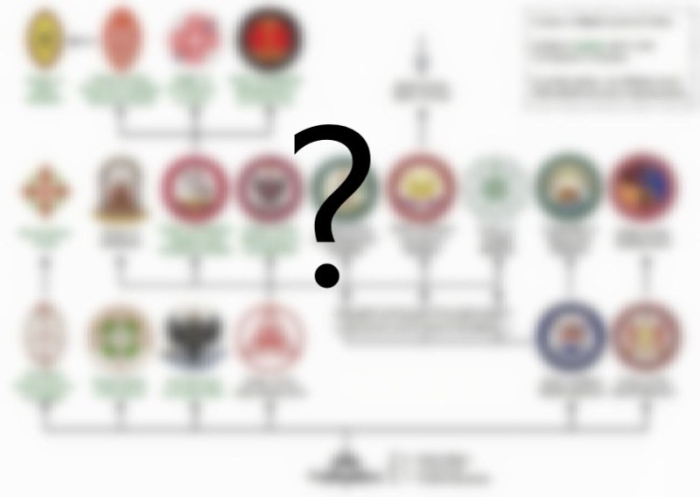 Before reading this post, I advise you to read (or re-read) part 1, and part 2. Otherwise, it will not make much sense.

Continuing the “quest” for definitions of rite, we start with no less than Albert Mackey. His life is worthy of a full post, dedicated to his talents and deeds. Suffices to say that Mackey was a physician, a journalist, and most importantly, an educator. Mackey dedicated most of his life to the study of languages, the middle ages, and Freemasonry, among other topics.

From his extensive bibliography, I picked two that will fit our purpose here: find definitions that were written to be definitions. For the distance of both works in time, it is also interesting to notice the adjustments made by Mackey. In the first work selected, “A Lexicon of Freemasonry” (1845, but the quote is from 13th ed. 1869), he defined Rite in a paragraph constituted of two phrases. In the first one, he defines rite in masonry, in the second one, a Masonic rite. Although complementary, they bring different pieces of information.

“RITE. A modification of masonry, in which the three ancient degrees and their essentials being preserved, there are varieties in the ceremonies, and number and names of the additional degrees. A masonic rite is, therefore, in accordance with the general signification of the word, the method, order, and rules, observed in the performance and government of the masonic system.” (p.410)

Here, Mackey brings a word that will be mingled with rite quite often across masonic literature: system. However, Mackey brought the term without specifying what he meant by “Masonic system”. But let’s fast forward some years and consult Mackey’s masterpiece “Encyclopaedia of Freemasonry and Its Kindred Sciences” (1873), in which he establishes a more concise, and polished definition.

“Rite. A method of conferring Masonic light by a collection and distribution of degrees. It is, in other words, the method and order observed in the government of a Masonic system.” (vol.2, p.626)

To match our previous post, it is pivotal to bring an English author with his definition of rite. He was writing at almost the same time, but on the other side of the pond. A. F. A. Woodford was one of these nineteenth-century Freemasons that through research took the Order to another level. Besides being a reverend of the Anglican Church, Woodford was an avid Masonic practitioner and researcher. He was behind the formation of the Quatuor Coronati Lodge, and of English publications on Freemasonry, such as “Freemasons” and “Masonic Magazine”. The publisher of these two magazines, George Kenning, sought the editorial niche of Freemasonry and issued the “Kenning’s Masonic Cyclopaedia”, in 1878. The book was edited by Woodford, by the time a Past Grand Chaplain of the UGLE, and shows a view as authorial as well-supported of the topics to be defined. He wrote

“Rite – Though in our English Craft Masonry we only know of or recognise the Three Degrees and the Royal Arch, yet in a Cyclopaedia we have to recognise that, for good or evil, there are so-called Masonic Rites in the world. Some of us may be disposed to reject this multiplication of Rites; others may look favourably upon some, at any rate; and therefore, in a work of reference, we have to mention them, whether we approve of them or not, whether we believe in them or not. It is impossible to give all here, as it would, we think, be profitless. Some say there are 108 rites and 1400 grades; but many of them are clearly only quasi-Masonic, and some not Masonic at all. We therefore only propose to give today those we have considered in our studies, or which our readers are likely to meet with in Masonic works…” pp.578-579

Other works, like “The Royal Masonic Cyclopaedia” (1877), by Kenneth Mackenzie, just bring some considerations about rites (as something implicit) without any definition other than the dictionary one. However, the theme “rites”, or “rituals” for that matter, gained several publications over the twentieth century. A list of these works would be fascinating but terribly extenuating. Let’s fast forward to 2014, to a chapter on the “Handbook of Freemasonry” named “Masonic Rites and Systems” written by one of the finest researchers on Freemasonry of this day and age: Mr. Arturo de Hoyos.

As in any handbook, de Hoyos had few pages to give an introductory, but deep, account of that topic. Instead of a single definition, he broadened the explanation, showing the differences of understanding that “rite” could acquire to Freemasonry, and for Freemasons. Nevertheless, he inserted in the title the word systems, as a separated although conjoined matter: “Masonic Rites and Systems”. I shall go back to that in the next post.

For now, it is important to close this series on definitions of Masonic Rite. I strongly advise everyone to read de Hoyos’ chapter (actually, the whole book is precious) since, to the purpose of my reasoning, I will be cherry-picking some of the definitions for “rite’ that he offers. After the lexicographic definition, de Hoyos informs, among other things:

“There are two main types of rites in Freemasonry: (1) a procedure with a symbolic or defining nature, such as the rites of circumambulation, discalceation, or investiture, which may be grouped to form a larger ceremony (or degree), and (2) the linking of masonic degrees, for initiation or instruction, under administrative or governmental authority. This chapter focuses on the latter application. […] In a general sense a Rite is any number of degrees grouped together. A Rite may be compared with a staircase, which is comprised of individual steps. The steps represent individual masonic degrees, whereas the staircase as a whole is analogous to a Rite. The degrees of a Rite will usually, although not always, have a numerical designation or fixed position on a calendar or schedule. The Rite may be further divided into sub-organizations (‘lodges’, ‘chapters’, ‘councils’,and so on), just as a staircase may be divided by a number of ‘landings’ which connect the stairs between floors. The degrees which comprise a Rite may be arranged in a particular sequence for any number of reasons, including mythology, chronology and/or tradition, or they may appear to be unrelated to each other, having been derived from various sources, or having been aggregated at different times.” pp.355-356

It is possible to verify how Arturo de Hoyos condensed and sophisticated the definition of Rite to comprise all the variations of conferring Masonic degrees. However, in the same article, he points out some differences that I understand as pivotal for a narrower definition of Masonic rite. In the next post, I will try to condense these understandings of Masonic Rite and check what these same authors have to say about the existence of an “English Rite”.